In this topic, I will discuss a common dilemma in software design, particularly when designing relationships and interactions between different software layers and components. 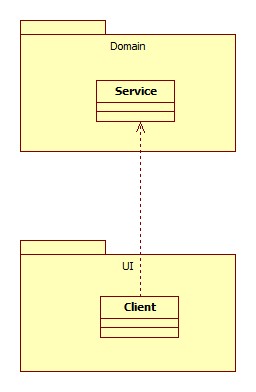 We need to make Client class unit-testable. In order to achieve this, we need to abstract away Client's dependencies, and among them (as you might guess) dependency on Service class as well.

Solution to the given problem is to have an interface representing Service, which we would refer from the Client class. However, this can be achieved by doing one of the two:

While the first approach (separated interface) might seem better, it is the wrong one. First of all, you just decided to extract an interface from Service, which means you didn't really have a good reason to do so until this problem revealed. Next, you are increasing the number of published interfaces by Domain layer, thus creating more maintenance and stability issues - the less the number of the published interfaces, the better the stability of the software layer.

Here is the diagram of the correct approach (followed by few advantages of it): 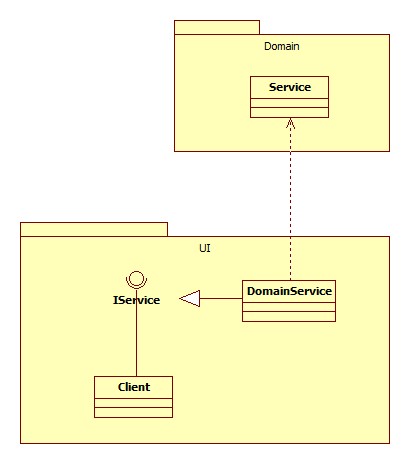 First, Client is limited to the knowledge of IService interface, which potentially is thinner than all the capabilities exposed by Service. Next, we just made Service (and thus Domain's capabilities) replaceable without referencing Domain's published interfaces. And finally, Domain's functionality is not dictated by UI; instead, UI adapts to the Domain's capabilities by translating them into UI's needs through DomainService adapter class.

One more benefit - obviously, Client class became unit-testable - which we wanted to achieve from the beginning.

You can learn more about design patterns by reading my other articles, or by taking one of my training courses designed for groups, where you can find several subjects dedicated to design patterns.

The author of the above content is Tengiz Tutisani - owner and technical leader at Tutisani Consulting.

If you agree with the provided thoughts and want to learn more, here are a couple of suggestions:


Ready to take the next step?